You are currently browsing the monthly archive for February 2011.

Here are the details on reading the leaves:
Runs 1st Friday of the month, the next one being friday 4th march
starts at 8pm, held at Tchai Ovna, Otago Lane, Glasgow
Suggested donation of £2 (to cover travel for readers)

This month Tessa Ransford and Jim Ferguson have been confirmed as attending. Also reading will be myself and David Walker. I’m hoping to get at least a couple of others on board by Friday but most people aren’t responding to my emails.

If anyone needs more details, they can just DM me or ReadingTheLeave on twitter, or send an email to

The first film to go into Production will be ‘Your Number’s Up’ – written by Andrew Niven and Director to be announced on 4th March.

Rehearsals will be in late March (evenings) for two nights (mid-week).

Shooting dates for the film will be either late March or early April over one weekend to be confirmed.

Small time gangster Michael McGarrett finds himself alone in a seedy hotel room with a bag full of cash, just about to conduct his first drug deal, when his apparent contact, sexy Kat, turns up early.

Before he knows it Michael is plunged into a life and death struggle with a whirling dervish in PVC, a riding crop and a role of gaffer tape. Only the loose screw on the door and a change of heart from a good woman can save the cash and spare his life.

We require both a male and female for the film.

Kat age range 25-35 – attractive, fit, confident, sexy but can be rough and kinky when required. The actress for this role must be comfortable with filming in a PVC outfit for most of the film.

If you are interested in auditioning for either of these parts then submit CV, headshots and any showreels to [email protected],com or you can mail them to:

Actors selected for auditions will be notified by Monday 7th March.


Two fledging filmmakers would like to cast their net in our acting pool, So best luck and please let me know if you get the part. cheers Linda, from Write Camera Action

CAST CALL 1) Shoot Sat.
Call Felix on mob:07758415690
Music Video requiring Actor – shoot Sat 20th 8-4pm Stow College.
Male 20 -32 yrs, 5’8+, any ethnicity for a music video being filmed around Glasgow for a band called the Boycotts. The successful applicant will have to do a bit of running and should be in good shape. Digital effects good for showreel.
> The music video is about a man who thinks he is special but is shown to be false and empty. This man is portrayed by an illusive hooded character who at the start of the song is found moving through various landscapes in Glasgow – he stops, opens his hand to find colourful vines however when he closes and opens his fist the vines have decayed and fall to the ground as ash. He runs towards where the band are playing on the roof at Stow College. He stops once more to find a visual representation of his heart beating, it turns black. Finally, he finds himself on the roof where he empties his pockets that are full of sand, he himself then disintegrates into sand.
CAST CALL 2) Auditions Mon 22nd
Short film. The premise is a horror/comedy involving 2 flatmates; Jeff the care-free lazy student, and Steve the sensible but paranoid type. Their home has been ransacked by an unseen burglar which turns out to be a sleepwalking Jeff. Very suspenseful with a light tone and plenty of scope for conflict and frustration between the two characters. A nice midly violent twist as well.
We will be having auditions for the part of Steve between 12 midday and 3pm on Monday 22nd of February in the Rankine Building of Glasgow University. Age range early 20′s
For anyone interested in the part please email Johnathan Buwert at  for the script, address and audition times.
A quick reference film of our own production can be found here.
Regards, Matthew Westwick and the Audio/Visual Team


The Network is the charitable arm of the MediaGuardian Edinburgh International Television Festival. The Network is open to those aged 18 and over and provides the opportunity to attend four days of FREE training in Edinburgh preparing delegates for a career in television.  Supported by the TV industry, The Network helps those that want to take their first step in TV.

Each year The Network offers successful applicants the opportunity to meet and work with the best TV talent from behind and in front of the camera, and gives them a comprehensive introduction to TV through masterclasses, workshops, networking events and careers talks. The Network takes place between 25 and 28 August 2011. Highlights from last year include a masterclass with writer and creator of Shameless, Paul Abbott, a research workshop with Charlie Brooker and the team behind Would I Lie To You? and masterclasses from Putul Verma, Series Producer, Dragons’ Den and Jay Hunt, Chief Creative Officer, Channel 4.

We have invaluable support from the television industry and our contributors include CBBC, ITV Studios, Endemol and Sky News. All the people involved are passionate about passing on their skills and insights to those starting their career in television

The Network has helped to launch hundreds of TV careers and past delegates now work across the industry in a variety of roles and shows. Members of our alumni include: Newsround Presenter Ore Oduba, Dominic Bird, Creative Director, BBC Entertainment North and Danny Wallace, Journalist, Author, Script Writer and Producer. Some of the delegates from last year’s scheme have already secured paid work at organisations such as Raw TV, Zeppotron, RDF, Nickelodeon and the BBC and almost half of the delegates have secured work experience placements in the few months following their attendance on the scheme.

With the exception of travel to and from Edinburgh, everything else, from accommodation and food to the actual workshops, is entirely free. Applications open on February 14 2011 and applications are sought via our website at www.mgeitf.co.uk/thenetwork. Applicants can save their application form and come back to it as many times as they like until the closing date – 15 April 2011.

BBC Scotland is on the hunt for talent “behind the camera” with the launch of a project aimed at finding new drama directors.

Scotland Directs will launch on Saturday 19th February, 2.30pm at Glasgow’s CCA, when further details for the year’s events will be available.

Together with a programme of talks and events, BBC Scotland is unveiling a new competition, and they want to see your short films.  The directors of the best short films, as chosen by a panel of top directors and producers, will be invited to take part in a course of masterclasses and workshops run by successful directors, and have the opportunity to undertake shadow placements on BBC shows.

David Blair says: “Any attempt to bring new directing talent to the fore is to be applauded. I’m delighted to lend my support for several reasons not least the fact that where it all began for me – BBC Scotland – is at the forefront of this initiative.”

Gillies Mackinnon comments: “Who will be a new voice for Scottish film?  Who will surprise us with something original?  BBC Scotland are issuing this exciting challenge and it’s interesting to be on the panel.”

John McKay adds: “I’m delighted to be part of Scotland Directs - for the first time in Scotland, an initiative that recognises the unique skills a director brings to film and television, and engages with the practical challenge of developing new talent – in particular making the crucial leap from first short films into the professional arena.”

Anne Mensah, Head of Independent Drama BBC Scotland comments: “Scotland Directs follows on the heels of the successful Scotland Writes project we ran last year.  We hope the scheme will inspire new talent to find a home, not only with the BBC but with our partner organisations.  There are brilliant directors in Scotland and we want to give them a platform to come together and celebrate the best of Scottish film and drama – past and present.  We are looking forward to a fantastic year.”

All entrants for the scheme must be aged 18 and over.

For the last year, G-Mac in Glasgow has been running Second Light apprenticeships for 10 young film makers from communities underrepresented in the film and TV industries. The Scheme aims to widen the diversity of the talent pool in Scotland and has comprised of training, placements, mentoring,and film production. Gmac would like to invite you to a series of events where you can meet the apprentices, watch their short graduation films, and and take part in the debate about diversity in the Scottish Film and TV industries.
The events are all ticketed and are being held as part of the Glasgow Film Festival.
Full details on the enclosed jpeg, or email 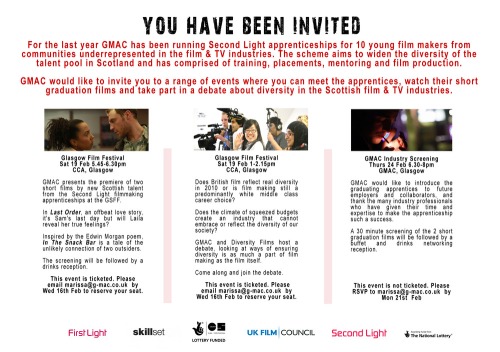 How to get results, not reports : Cross-functional teams can be notorious for generating reports, recommendations, and suggestions for implementation — but no actual results. Next time you manage a team of people from different parts of an organization, focus them on making change, not proposing it. The first step is to alter the nature of the task. Don’t ask your team to “look at” or “study” a certain issue. Challenge them to solve it: reduce costs by 10% or improve the speed of a process two-fold. Then, authorize them to experiment. Encourage them to try possible improvements to see which work. Not all will, of course, but the team will build momentum for implementation and prepare the organization for change. You may still want a report, but it should cover “what’s been done,” not “what can be done.”

Please consider the environment and think before you print

University of the West of Scotland is a registered Scottish charity. Charity number SC002520.

The information transmitted is the property of the University of the West of Scotland and is intended only for the person or entity
to which it is addressed and may contain confidential and/or privileged material. Statements and opinions expressed in this e-mail may not represent those of the company. Any review, retransmission, dissemination and other use of, or taking of any action in reliance upon, this information by persons or entities other than the intended recipient is prohibited. If you received this in error, please contact the sender immediately and delete the material from any computer.