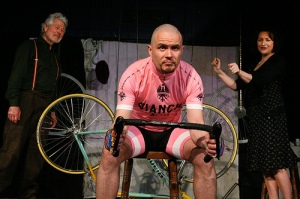 Two days into the run of Marco Pantani and you can feel a collective sigh of relief from the Cast and Crew as they start to enjoy the run as it beds in. When you open a newly written  play you have literally no idea what the reception is going to be like. I recall many years ago going to the Traverse for the world premiere of the wonderful “Losing Venice”, written by Jo  Clifford. The audience reaction was euphoric, and the play went on to great success all over the world. The actors were so unsure of what they had just performed,  that one of them, Simon Donald, later confessed to me that he had thought that the audience were  cheering and clapping because they  were “taking the mickey.”

So it gives me a great pleasure to say that (so far)  both the audience, and now the critical  reaction for “Marco Pantani” has been overwhelmingly positive with a four star review in The Herald.

I have to confess that “Marco Pantani”  would never had been finished and produced on stage  if it hadn’t been for the University Of The West Of Scotland and the support of the staff and students. UWS lecturer (as well as writer and actor)  Martin McCardie,  has encouraged it’s development all the way. My UWS colleague Dr David Overend  brought the whole project to fruition and has directed it with aplomb. I  also want to thank UWS graduate Stuart Watt for his marvellous work on the soundscape, the UWS studio team of Jamie Hare and Keith Bird   for the video effects, and UWS Graduates Debbie Lochran and Catriona Hepburn for their hard work backstage.

Outside of UWS, praise is due to  all the staff at Oran Mor who have been a pleasure to work with. Huge respect for my amigo Sergio Casci, who tried (and failed) to get me to understand the intricacies of Italian Grammar.Thanks   must also go to Craig at Carrick Cycles in Ayr, for all the effort and care he put in to re-creating Marco’s Tour De France winning bike. Most of all, I’d like to thank  my friend, actor Tom McGovern, who first gave me the idea of writing a play about Pantani about 5 years ago.

Here is The Herad review  Written by Alan Chadwick on Wednesday 15 May 2013.

“Stuart Hepburn’s bio-play about legendary Italian road racing cyclist Marco Pantani couldn’t be more timely, what with the Giro d’Italia, which Pantani won as well as the Tour de France in 1998, currently underway.

The great thing about bio-plays, at least ones as well written and well acted as this one, is that even if you’ve never heard of the subject, it doesn’t take much to go along for the ride and find yourself gripped by their story.

That’s certainly the case in this excellent three-hander starring Blythe Duff, James Smillie and Jordan Young as Pantani – nicknamed “the Pirate,” because of his shaved head and the bandana and earring he wore.

Informative, emotive and poignant, the piece is a fall-from-grace cautionary tale ,wherein we witness the youthful dreams and drive of one of the greatest mountain climbers ever, as he focuses on becoming a legend in his own lifetime, onto the fame he enjoyed (the Pope requested a signed jersey), before eventually hitting rock bottom in a career cut short by a doping scandal that saw him end his life alone in a hotel room, dead from acute cocaine poisoning.

Full of recurring leitmotifs (the river, Duff as his unstable mother, urges him not to cross; metal on flesh), the backstory details and switches in time are deftly handled by director David Overend. He also coaxes fine performances from his cast, with Young in particular a tour de force.

Like his great rival Lance Armstrong, unfortunately, Pantani’s legacy didn’t turn out to be all about the bike, but rather all about the drugs. But his story makes for compelling drama nonetheless.”

You can buy tickets online here.

The play runs at Oran Mor till Saturday 18th of May. There is one additional performance at The Beacon Arts Centre in Greeenock on Sunday 19th  May.

Full details of University Of The West Of Scotland Creative Industries Programmes can be found here.