You are currently browsing the tag archive for the ‘Television studio’ tag.


This week Contemporary Screen Acting students at the University of The West of Scotland took part in the launch of a unique new creative Screenwriting project. “Studio Lab” is based in the UWS new 80 million pound Ayr campus where students have access to two  full HD state of the art TV Studios.

As part of their final year Research Project, Ba (Hons) Contemporary Screen Acting  students are creating an hour long drama which will be recorded live in  December  at UWS studio 1 .However, what makes this cross-over project unique is that students from other UWS Programmes are being integrated from the beginning into what will be a 12 week process.

Every Wednesday afternoon, Film Making & Screenwriting  students will help to develop the narrative, Broadcast Production students will be in charge of the recording and vision mixing it, Commercial Music students will supply the soundtrack and so on. The whole enterprise will come to a climax on Dec 5th when the entire team , directed by “Chewing The Fat and “Still Game” director Michael Hines, will record the drama “live” in the TV Studio.

As leader of the Programme, I am supposedly  in creative charge of the whole process but if truth be told it is the students who are leading the way. The first step was taken in our main Studio 1  yesterday when the actors took started  their initial improvisation .They are charged with the task   of creating three dimensional characters who will eventually go on to improvise a script which will then be rehearsed and acted out  in the drama.

While the Screen Acting students took part in a tense “hot seat” improv, Film Makers recorded their every move on two HD cameras. By next week we will have a digitised and  edited Quicktime of the process created by the Film Makers , and it will be viewed by all participants . They will then discuss the characterisation  , decide what to use and what to drop, and then move on to recording  the next stage of the improvisation,  and so on. A script will evolve over the first 6 weeks of this process, and by week 11, a fully fledged unique studio drama will have emerged to be recorded in  the final week.

Students at the first session described the process as being “an intense experience”……”as soon as I was under the lights, all the stuff I had planned on using disappeared, and I found I was really being the character”.

The whole idea of the “Studio Lab” process is to create an exciting collaborative environment where we mimic the professional Creative Industries where teams of different disciplines get together to create the final product. If the first week is anything to go by, it will reap creative rewards. We don’t know if the final  programme  will be a comedy, a drama, or a mixture of the two genres, but it will certainly be a unique  experience for all concerned. 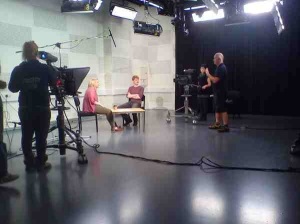 
Last week was the first recording run  through of the TV Studios at the University Of The West Of Scotland‘s new 80 million pound campus in Ayr. Camera Acting students from the Contemporary Screen Acting Programme were recording the first ever series of screen dialogues at the new campus. Students re-enact duologue scenes from movies such “Juno”, “Bridesmaids” and  “Let The Right One In” in order to gain experience of working in a multi-camera studio set up. The above photo shows 4th year honours student  Alana Murray working on the production of her multi-media Creative Project with her cast.

Along with the finest radio and music studios in Scotland, UWS Ayr now boasts two  state of the art HD studios with Green Screen Technology,  Autocue, and top of the range sound and editing facilities. There is space for large scale productions such as dramas, orchestral performances and musical theatre, as well as room for up to 30 students to view the process from the gallery.

The feedback from the students has been very positive. Debbie Lochran commented ” This is fantastic. I’ve never seen a set up like this before anywhere else. You get the idea that you could create any programme you wanted” 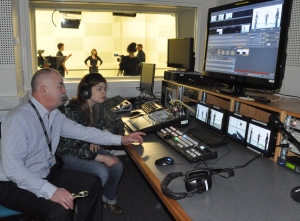 Zoe Silver said ” I feel like a real professional. The first job I had to do was to be a camera operator in headphone contact with the control room and it went really well”.

Jess Munro commented “I’ve never acted in a studio before, but within minutes I had forgotten about the cameras and lights and was able to concentrate on my performance”.

As we roll out the use of the studio for the fourth year honours students and  post graduates, the amazing potential of this resource is going to be unleashed. Students will be able to create , record and distribute HD broadcast quality programmes , be they filmed dramas,  documentaries or  light entertainment shows.

It’s a genuinely exciting time for all involved.The first slate of programmes recording in the next few weeks  include a Gaelic Children’s show, a modern digitised re-enactment of Tam O’Shanter, an experimental multi-media theatre piece and a  Scottish take on the “Creep Show ” horror format.

I hope to post footage of the work as it is created, and release them through the UWS  Skillset Media Academy 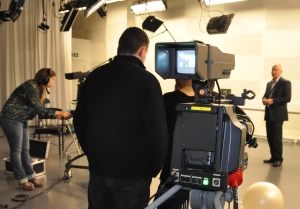