You are currently browsing the tag archive for the ‘University Of The West’ tag.

Yesterday the UWS  production crew  spent the day in the delightful company of inventor and entrepreneur Giovanni Benedetti at his factory in Wishaw. Gio told the story of how he and his team  had developed the idea of a practical aid to prevent the dangers of Deep Vein Thrombosis (DVT) on long  air journeys.

His “Actiflo” system has just been approved by the North American authorities as a direct result of the testing which UWS was able to carry out on the effiiciency of the product.  “Without the work of UWS, the US authorities would never have allowed us to sell in the States and Canada. It is going to make a huge difference to our sales.”

The team then headed out to our Hamilton Campus where we filmed the work of Dr Fergal Grace a Senior Lecturer in  the UWS Excercise Science group at our Hamilton Campus . Fergal was able to explain the process whereby UWS is able to carry out clinical scientific trials for local businesses in order to enhance their products and develop their marketability. These business to university relationships can all be set up through the Innovation and Research Office. For more information on how they can help local businesses and SME’s please click HERE. You can also phone IRO at 0141 848 3400 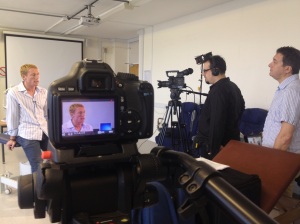 Look out for the UWS “Open For Business”  video when it is launched in the Autumn.