You are currently browsing the tag archive for the ‘Zine El Abidine Ben Ali’ tag. 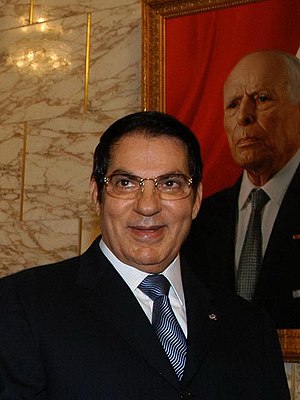 The Jasmine Revolution: A Personal View.

My family and I holidayed in Tunisia 18 years ago in 1992. We stayed in the holiday town of Hammamet and I  was considering  comibining work with leisure  by  visiting Tunis. I had been toying with the idea of writing a screenplay about the middle east conflict, and  by chance heard that Yasser Arafat, Chariman of the PLO  was due to make a major speech on the chances of the PLO returning to the West Bank.  I never went to Tunis, the script remained unwritten, and  I spent the time on the beach, and in the souk, with my family, as one does. A highlight of the holiday was stumbling upon one of the most beautiful houses I had ever seen, Sebastian’s Villa designed by Frank Lloyd Wright. You might have spotted in the  Fred Schepsi  Movie  “Plenty”. Anyway, that’s not the story I want to tell.

We were sitting in one of the town’s excellent  fish restaurants one sultry evening having enjoyed an exquisite meal of sea bass baked in salt , when a scruffy  little Tunisian boy of about 9 approached our table. He  was holding out small bundled nosegays made up of jasmine flowers threaded through slivers of reeds, and asked me if I wanted to buy one of them for my wife. Being a typical romantic Scotsman, I shooed him away, in much the same way as one tells those rose sellers where to go with their unwanted wares. However, the kid was obviously used to rejection from cynical  Scots holidaymakers. He  persisted, and asked me to smell the profferred bundle of tiny flower heads. I was cornered, with nowhere to go, and so smelt them. I swear I have never smelt anything so beautiful in my life. So I shelled out the massive sum of about 50p for one of the bundles,  and the little boy left, smiling and happy.
About an hour later we were strolling through the dark silent streets back to our hotel, when we heard the sound of singing coming from the road behind us. I looked back, and there was the little boy, sitting on the handlebars of a bike being ridden by a raggedy-sandalled  boy of about 15. Our little jasmine seller was on his way home, presumably  with his big brother.
As he passed, he spotted us, and I waved at him. He waved back, and then told the older boy to stop pedalling. He jumped off the moving bike, and ran across to us. To my shame, I thought, “Oh here we go, he’s going to try to sell us another one.”
That’s not what happened. He had one small bunch of jasmine flowers left clutched in his fist. He smiled a huge grin and offered  them to my 4 year old daughter  who was standing beside me,holding my hand . “For the little girl.” he said. Before I could say a word, she took them,  he smiled, and then ran back to the bike. He jumped back on to the handlebars  and the pair wobbled,  off with him singing his song as they disappeared down the road. I was stunned.  It was , quite simply, one of the most moving acts of random kindness I have ever had the honour of benefitting from. Even now, 18 years later, it still affects me  me as I write. The next day, we  went in to the souk and bought a wonderful hand woven carpet in the design of thousands of jasmine flowers, which sits to this day on our  living room floor. There’s not a week goes by I don’t look at the flowers on that carpet, and think of that little boy.
I have never been back to Tunisia since, and I have to confess to my shame that I am woefully ignorant of the politics of the country. Even after the rolling out of the latest implications of the wikilleaks story, I had no idea that it had exposed the greed, venality and corruption at the heart of this beautiful country . But  this week, along with everyone else, I watched with horror as I saw the protesters on the streets being shot by the army, and marvelled at the bravery of a desperate  people in a revolutionary situation, literally willing to trade their lives for freedom.
As I watched a bulletin yesterday, a young man in his late  20s  came up to the  reporter and breathlessly   told him that the people would win,  and that the old regime of Zine al-Abidine Ben Ali was being condemned to history. And I thought of that little boy. I don’t know where he is now.  He would be about 27 or 28, the age of my own oldest son now,  and the age of that young protester.
He could have been 26 year old  unemployed university  student,  Mohamed Bouazizi, an unemployed university graduate, who the Guardian this morning tells me started off this revolt on the 17th of December when he set himself on fire as a protest outside the state Governer’s office in Sidi Bouzid. http://tiny.cc/dlhgl
He could even have been one of the plain clothes police we all saw beating up a fallen protester on the streets of Tunis yesterday.
Whoever he was, or is, that little Tunisian boy  changed my life, in however small a way, and he doesn’t even know it. So on behalf of him,  I salute the brave men and women of Tunisia.  Long live the  Jasmine Revolution.
Stuart Hepburn
Follow me on twitter
www.twitter.com/stuart_Hepburn
Follow my blog
https://uwsscriptwriting.wordpress.com/
0.000000 0.000000